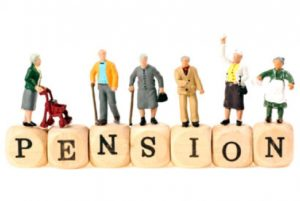 When I was a young boy, my father often lectured me on the importance of finding a job with good retirement benefits. His favorite subject was pensions. He could talk about pensions for weeks without getting tired. One of my favorite of his phrases was: “If you’ve got a solid pension, that means you’re covered. You can get old with no worries!”

He was exaggerating, of course, but I’d like to draw attention to his phrasing. The phrase “you’re covered” is indicative of what a traditional pension once meant. For my father’s generation, a traditional pension was something everyone strived for; it was the T. Rex of retirement benefits. People spent their entire lives at one company in hopes of receiving a pension. Much like the actual dinosaurs, however, traditional pensions seem to be going extinct.

What is a Traditional Pension?

There are several different kinds of pension plans. However, when most people think of a pension, they’re thinking of a defined benefit (DB) pension plan. These plans are typically pretty straightforward. Your employer agrees to play you a certain amount each year after retirement until you die. The amount you’re paid is based off your salary and your years of service.

The key component of DB pensions is that doing your job marks the end of your obligations. The responsibility of providing for your retirement income each year rests squarely on the shoulders of your employer. This benefit allows you to rest easy in retirement, knowing you have a secure income stream that you can’t outlive.

One common misconception concerning pensions is that they aren’t reliable. Many people believe that their money is dependent on the company they worked for. In actuality, most pensions are insured by the Pension Benefit Guaranty Corporation (PBGC). The PBGC is a branch of the federal government created to ensure that retirees would receive what was promised to them even in the event of a company shutdown.

The benefits of a federally insured income stream make pensions one of the most secure sources of retirement income. That’s why it’s ideal to use your pension funds to meet your Needs expenses rather than your Wants in retirement. The added financial security frees you up to safely pursue your Wishes. For more information on planning out your retirement according to the Needs, Wants, and Wishes framework, click here.

One thing to keep in mind when considering your pension is its Cost of Living Adjustment (COLA). Most state and government pension plans feature a COLA compared to only 10% of corporate pensions. If your pension plan doesn’t have a COLA, it will decrease in relative value over time as inflation rises.

As mentioned previously, DB pension plans can be expensive for companies. That’s why many companies reach out to their younger employees and offer to buy them out. In other words, these employees have the option of taking money today in exchange for their future pension payments.

To get a better understanding of how this applies to you, let’s work through a real-life example. In this example, we’ll call him Joe, and he was due a monthly benefit of $427.50 to begin when Joe turned 65 years old. His company contacted him with two different buyout offers. The first offer was a lump sum $28,205.97, and the second offer was a single life annuity payment of $111.70 per month starting immediately.

The key to deciding which option to take is understanding each options market value in today’s dollars.

As we can see in the table below, option A is of far greater value than the latter two. However, the other two options offer immediate payments.

The next step in analyzing a buyout offer is calculating the annual rate of return needed to receive (assuming one took the lump sum option) to equal the current market value of Joe’s pension plan.

This can be done by calculating the interest rate of return or IRR of investing the lump sum today and then receiving the original pension benefits. 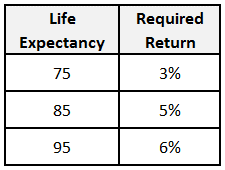 The last step in analyzing one’s options is considering the current state of the stock market. For instance, when the events in this example took place, the market was expecting lower returns, making the security of the pension plan seem more desirable.

In the end, however, should your company offer to buy out your pension, the final decision should be based on your circumstances and behavior. For instance, if you are a particularly savvy investor, it may make sense for you to take the lump sum. On the other hand, if you expect to have a long life and you’re skeptical about long-term market results, you might be better off keeping your pension.